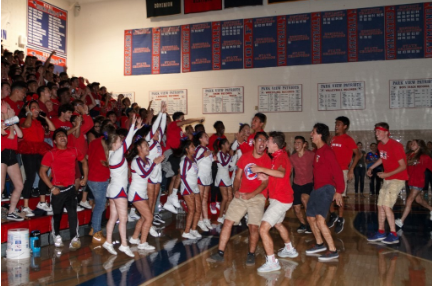 Park View recently started using a point system to determine the winner of pep rallies. The Spirit Stick is awarded with consideration of three things: Pep Rally spirit, Dress-up days participation, and Spirit Links donations. Pep Rally spirit, unlike the other two, is hard to quantify with numbers. Because of this, there was no rubric or “points” in determining the Spirit Stick winner. Instead, the judges (usually the current season’s coaches) took into consideration all the data from the week when they made their decision.

This decision was made by Mr. Vereb, club sponsor/SCA teacher, and the Student Council Association (SCA). The SCA Officers and Committee chairs developed the plan for this system during the SCA class, and it was discussed and voted on at their December SCA meeting.

“I honestly thought it would be a great idea because we’d hope it’d get a lot of people to participate in spirit week. The outcome was impressive at first because much more people dressed up compared to other pep rallies. Once we got into spirit week, you could just see how upset it was making people because they thought it wasn’t fair,” said Savannah Strope, Historian for the SCA.

“At first I was confused because pep rallies have always been about who the loudest class was. I would like it to go back to normal because everyone wants to put in all their effort for pep rallies. Yes, spirit week is important, but forcing people to dress up isn’t fun,” said Junior Valerie Wilhelm.

Park View students responded to a close poll on Instagram where they were asked whether they liked the system or not. The results showed that 96 out of the 183 students who voted answered no, that they did not like the system. 87 students voted that they liked it, which consisted mainly sophomores. The sophomore class won the winter pep rally with the most points.

Despite the results, some students like the change and hope that SCA would continue with the system.

“I don’t think they should get rid of the system. It gives more opportunities for other classes   to do their best. I love dressing up for spirit week because it shows that I have spirit and my involvement towards the school. The system is fair and other people don’t like it only because they lost or they’re too lazy to dress up,” said sophomore Silvana Rivera Espinoza.

A change to the system is expected soon. Mr. Vereb and his SCA class have decided to go back to the way it used to be and decide who wins the pep rally based on the loudest class. They have also decided on a new award, called the Spirit Star. This award will begin next year for the class that has the best participation during each Spirit Week.

The Spirit Star would be awarded before the Pep Rally to the Class that had the most participation during the week. Each Spirit Week will have a “point” of the star and at the end of the year the student body would be able to see which classes had won the most times.

“To be honest, people care too much about winning, but if they’re winning fair and square then they’re sore losers. Doesn’t add up. The system was cool and it would get students to participate more so I don’t see the big deal of it all,” said senior Marylynn Nguyen.

Despite all the negative comments and backlash, Mr. Vereb and the SCA received, the participation for this spirit week increased.

“I was very pleased with the outcome. Our goal was to increase participation and that happened. We know that some spirit days will always have more participation than others, but the data shows that participation shot up after the Monday’s results were posted for the student body to see. “ said Mr. Vereb, SCA teacher and sponsor.